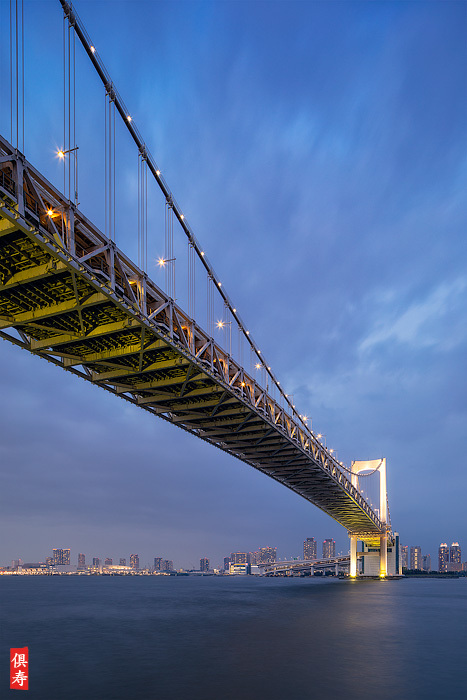 Constructed between 1987 and finished in 1993 by Kawasaki Heavy Industries the officially named suspension bridge “Shuto Expressway No. 11 Daiba Route – Port of Tokyo Connector Bridge” is the main link from Shibaura to Odaiba waterfront development, an artificial island compound within the Tokyo Bay (Tōkyō-wan).

Certainly due to constrained space, earthquake risk and navigable waters the architects were faced with a lot of requirements in technical aspects: the 2 decks, on the upper is the Shuto Expressway No. 11, the lower features the automated guideway transit Tokyo Waterfront New Transit Waterfront Line, informally the Yurikamome, the toll-free Tokyo Prefectural Route 482 and a pedestrian walkway, are at least 52 m above sea level, the 2 towers reach 126 m of height. To save precious land the western ramps are constructed as concentric circles with a diameter of about 300 m winding up to the needed height for ships to pass through safely. The total length attributes to 798 m with 3 spans, the longest is 570 m.

By public decision the commonly known name is “Rainbrow Bridge” (Reinbō Burijji), which derives from its illumination at night with the basic colour of white (mixed with red and green on special occasions). The bridge itself has become another symbol of a modern and cosmopolitan Japanese capital.